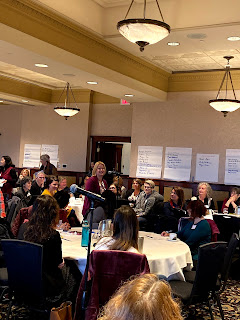 BCNDP Women's Rights Committee Convention We started our BCNDP convention experience off by attending the Women's Rights Committee (WRC) convention which occurs prior to the opening plenary.  We were fortunate to have Rhiannon Bennett, from Delta, give the territorial acknowledgement. She started off by holding up a purse and a scarf, and acknowledged that both of which belonged to Maurine Karagianis. She asked "is it enough to acknowledge these items of Maurine's if I have them, for her to access the economy ?" Nope. We, the NDP need to do better - it's not about shame or guilt, but about acknowledging the privilege of what we've been given. She talked to us about the resilience of indigenous peoples and how they've been able to save their languages in the face of being being jailed for speaking their languages, having needles poked into their tongues in residential school, and other horrific things. Rhiannon brought humour and heart to her te
Post a Comment
Read more 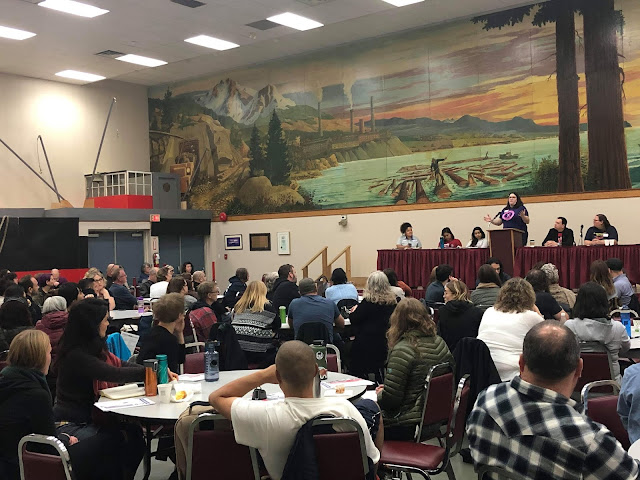 "Where I come from we are not called troublemakers or shit disturbers, we are human rights defenders. When we stir some shit it's for the working class!" Chris Sorio, Migrante BC So in April 2018 I went to Chicago and attended the Labor Notes Conference for the first time and it changed my life. It was the first time I had gone to a conference so big, so unapologetically socialist, so full of a class analysis, focusing on organizing, on movement building, on workers' power! To put the "movement" back in the labour movement! It was not about which position you held in the union, it was about the collective working together to fight against the right and the boss and workers to take ownership of their unions. I wrote extensively about it on this blog - here , here , here  and the session with the West Virginia Teachers got their own post . It was at that conference I met a ton of awesome activists from BC. The Vancouver crew met at the Canada caucus a
Post a Comment
Read more

Reflections After the 2019 CUPE National Convention 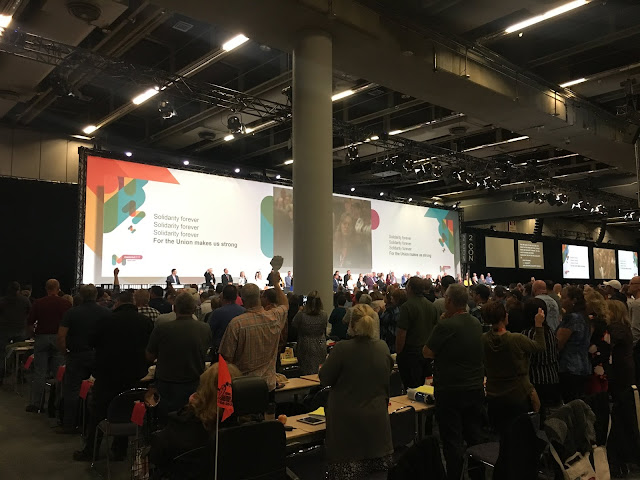 "Solidarity of the working class is the greatest force for change in history."  Sara Nelson, CUPE National Convention 2019 The 2019 CUPE National Convention took place in Montreal, October 6-11th. This convention marked 10 years since I attended my first union event and as the BC Caucus Whip, I was really excited for the ensuing week. I am so proud to be from BC. I tried to coordinate the floor differently this time by using an app that would enable communication to get to delegates in a more consistent and timely manner. Our executive board came together, we huddled, chatted and cheered each other on. Everyone stepped up when I needed help and I thought we did a great job repping our region.  Here are some of my thoughts on various parts of convention. Post-Secondary Sector Meeting This year, the post-secondary sector meeting focused on the rise of hate on our campuses. We were fortunate to have Kimalee Phillip, one of our Human Rights reps, speak to
1 comment
Read more

Reflections Before the 2019 CUPE National Convention

October 16, 2019
10 years ago, I entered the convention hall at the Palais de Congres in Montreal and had no idea what I was getting myself into. It was my very first CUPE National Convention. I was new to the union, a young worker, and really overwhelmed by the size of the floor and the number of chairs in the room. I'll admit, I thought the whole "brother/sister" thing was super creepy. (I did not know the history of those terms, that I have come to love). There was so much going on - it  was hard to keep track. The paramedics in BC were on strike and we all got t-shirts as a solidarity act and I thought that was pretty cool. Then we shut down the streets of Montreal and marched to city hall in support of local 301, Montreal's blue collar workers. That was FUN! I went to the Young Workers caucus and there were maybe 20 of us there - probably less. Later in the week, I was approached by someone from the Young Workers' Committee to speak on one of their resolutions. I HATED p
Post a Comment
Read more 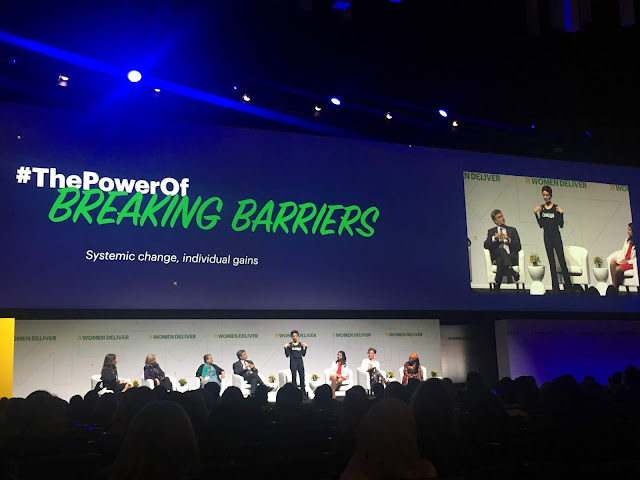 The Power of Breaking Barriers: Systemic Change, Individual Gains Dr. Natalia Kenem, the Executive Director of the UN Population Fund introduced and set the context for this panel. She said that women belong at the centre of development. Population isn't just about numbers it's about people's lives. As we take global stock of what's happening in the world, when everyone awakens, mountains will move.  And there is movement, and we'll hear from the following panelists on how we are moving toward progress and change. Panel: Shahira Amin - Independent Journalist (moderator) Dr. Alvaro Bermejo - International Planned Parenthood Waneek Horn-Miller - Indigenous Olympian Hina Jilani - Supreme Court of Pakistan Musola Catherine Kaseketi - Vilole Images Productions Nancy Northrup - Centre for Reproductive Rights Lina Abirafeh, PhD - The Arab Institute for Women at the Lebanese American University Anoka Primrose - Social Entrepreneur Nancy Northrup from t
Post a Comment
Read more

Women Deliver: The Power of Integration and Scale 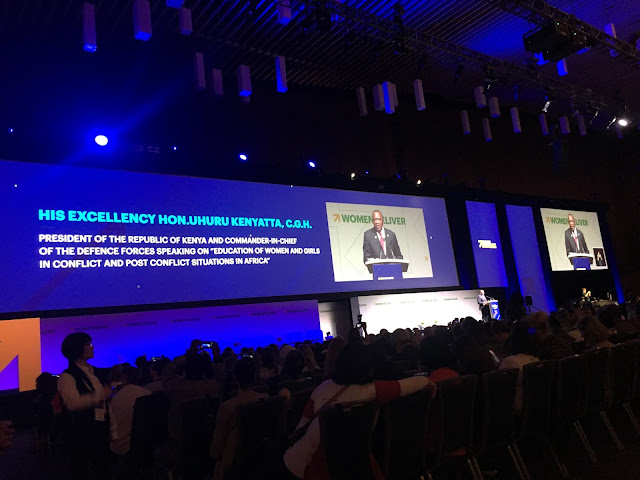 The Power of Integration and Scale: Driving Big Global Social Change This plenary was opened by remarks from the President of the Republic of Kenya His Excellency Hon. Uhuru Kenyatta. Kenya is focusing their policies and legislation on women's rights. He said that good leadership is drawn from the aspirations of the population and it must include all in its population. There is an economic, political and moral imperative to centre women and girls in government policy. He ran through the list of things Kenya is doing: enact the first policy to that is focused on pre and post-natal care $480 million USD investment in maternity services and child immunizations reserve 30% of all government procurement for women, youth and the disabled (in the form of credit and training) moving towards the elimination of gender-based violence and female genital mutilation "gender mainstreaming" - to lift women out of poverty, improve illiteracy levels and cure diseases to st
Post a Comment
Read more
More posts

Karen
A trade unionist. An activist. A friend. A sister. This is my story of finding my place and passion in the Canadian labour movement. **Opinions are my own and do not reflect any organization I am affiliated with**